Disney’s Hocus Pocus 2, the long-awaited sequel to the perennial Halloween classic, debuts today exclusively on Disney+. The live-action comedy follows the wonderfully wicked Sanderson sisters—Winifred (Disney Legend Bette Midler), Sarah (Sarah Jessica Parker), and Mary (Kathy Najimy)—as they run amuck, amuck, amuck in modern-day Salem. Twenty-nine years have passed since someone last lit the Black Flame Candle, bringing the witches back to life—and now the sisters are back for more than revenge.
At first glance, it may appear as if the witches look exactly the same as they did when Hocus Pocus was released in 1993. For the sequel, however, the filmmakers wanted their costumes to look similar to the originals, but not be actual replicas. “We wanted to refresh their looks,” says costume designer Salvador Perez. “Plus, the witches disintegrated at the end of the first film, so they would need new costumes anyway.”
Perez and his team wanted to study the original costumes and conduct a detailed assessment of each outfit before they could reimagine and update them for the sequel. At that time, the costumes were on display at the Museum of Pop Culture in Seattle as part of the Walt Disney Archives’ Heroes & Villains: The Art of the Disney Costume exhibition. “The original costumes are in the Disney archives,” explains Perez, “but there was only one costume for each actor.”
Following a close examination, Perez continued to do research to update the characters’ costumes. For Winifred, he painted her coat and embroidered it with metallic threads and crystals. The symbols on her dress are based on Wiccan mythology of three moons, which also symbolizes the three sisters. “I incorporated the eye to reference the Book of Spells, and the ravens on the coals are inspired by the Witch [Hannah Waddingham] who first appears as a raven,” Perez says.
Director Anne Fletcher adds, “The symbols on all three of the witches’ outfits, especially Winifred’s, mean something. In the 1600s, that version of witchcraft was tethered to the Earth, the ocean, the stars. It was all tied together. You can see it all reflected in things like Winifred’s cloak or in Mary’s rings.”
According to Perez, the buckle on Winifred’s coat includes a malachite stone from a jewelry store in Providence, Rhode Island, where the sequel was filmed, and the same jewelry store also provided the stones for her broach.
Winifred’s boots in the original film were off the rack, and a pointed toe was applied later on—but Perez wanted to push that look further in the sequel. “I went to the master shoemaker at Western Costume Company, who handcrafted her boots with the pointed toe built in,” he says, “and they are one of my favorite parts of her costume.”
While evaluating Sarah’s original bodice from the Walt Disney Archives’ collection, Perez noticed it was made with embroidered fabric that had been cut up. For her updated look, Perez hand-embroidered Sarah’s bodice with a floral and thorn motif and included spiders throughout the design to highlight her love of eight-legged arachnids. “The original sleeves were made from a mesh fabric, which wasn’t a period detail, but Anne Fletcher liked the spider idea, so we decided to make the sleeves out of individually crocheted spider webs that were joined together to make up the sleeves,” he says. “Then I found a French Chantilly lace that had the same pattern as the original skirt front, and the rest of the skirt is made from layers of dyed chiffon and organza.” 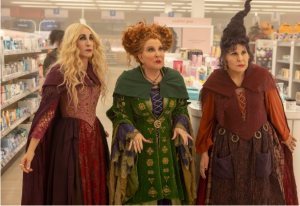 Since Mary’s original costume was very heavy, Najimy requested it be lighter for the sequel. “I wanted the fabrics to be more authentic to the period, so we found a tartan flannel that was similar to the original fabric that we dyed and added crystals to,” Perez says. “The original rings on her bodice were simply decorative, but I wanted them to have a meaning, so we made them out of hammered brass and had the Wiccan words for earth, fire, wind, and water carved into them.”
In Hocus Pocus 2, Sanderson sisters have two costumes each, with six to eight different versions of each costume for stunts, flying, doubles, and so on. The three witches’ capes, which are meant to billow in the wind, are made from silk Habotai, and each one uses 26 yards of fabric, which was double layered and embellished with Swarovski crystals.
The new costumes will no doubt cast a spell on audiences—and Midler, for one, can’t wait to see how fans recreate and reinterpret them. “I look forward to it every year,” she shares. “I just laugh and laugh. People send and post pictures. It blows my mind!”