The future of Star Wars lies with The Mandalorian. The Disney+ streaming series has been one of Disney’s most consistently successful projects since their purchase of Lucasfilm. As the series enters its third season, the show has launched an entire universe within the Lucasian canon, centered around Pedro Pascal’s Din Djarin and his trusty (and adorable) companion Grogu.
As of now, it is unknown just how long The Mandalorian will go. Still, showrunner Jon Favreau seemingly has extensive plans with talks of multiple spin-off series and a “climactic story event” that will tie together the Mando story.
It has been some time since fans have gotten an update on future plans for the Mandoverse, but one of the show’s stars has offered a small tidbit that should intrigue those looking for more of Din and Baby Yoda.
More Mando On The Way 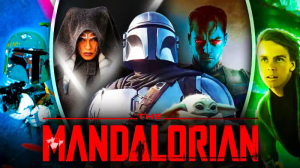 Speaking with Variety at D23, The Mandalorian star Katee Sackhoff indicated that an ending to The Mandalorian is being planned.
Sackhoff confirmed that “[she] has been told” by producers how many seasons the series will run until it concludes, but fans will “just have to wait and see if that happens”
As a follow-up, Sackhoff said that showrunners Jon Favreau and Dave Filoni “[are] constantly expanding this world” and that audiences will not “be lacking for [Star Wars] content any time soon:”
Teasing the upcoming Mandalorian Season 3, Sackhoff told Yahoo! Entertainment at the same event that this season is “different.” It’s still the show that “people have come to love and know” but called it a “little faster-paced,” while comparing it to a “moving train:”
How Much Mandalorian is too Much?

Surely, fans have not yet met the saturation point when it comes to Pedro Pascal’s Mandalorian and his adventures across the galaxy, but one day the end to this beloved character’s story will come. However, as indicated by Katee Sackhoff at D23, that end seemingly is not coming for quite some time.
But this isn’t the case of making content until it overstays its welcome. Judging from the way Sackhoff says she has heard how many seasons The Mandalorian will eventually go, there is an end at least in sight. The series is at least getting a third and fourth season, but beyond that, it is unknown what the future hold.
Everything has to come to an end at some point, but as mentioned before, the MandoVerse is supposedly going to do so with some sort of bombastic culminating event which should excite fans.